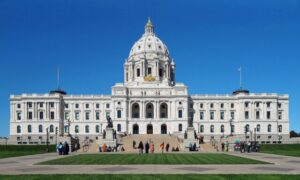 What looked like an eleventh-hour compromise to push through extensive bills in the Minnesota Legislature, including several for the Minnesota Indian community, ended with a whimper when on May 17 the Legislature adjourned.

“We humbly ask Governor (Tim) Walz to call a Special Session and for legislators to return to the Capitol and finish their work on behalf of all the state’s citizens – especially the urban Native American population,” said Joe Hobot, president of the American Indian OIC education and training group in Minneapolis and chair of the Metropolitan Urban Indian Directors (MUID) organization.

Left undone were major statewide legislation for education, health and human services, transportation and public safety that are necessary for programs affecting all Minnesotans. In addition, a major state bonding bill in which the state effectively invests in services and buildings for Minnesotans also got shelved.

That latter bill was important for Hobot and his colleagues in MUID who are also involved with the Urban Indigenous Legacy Initiative (UILI). The latter is a coalition of 16 Native nonprofit organizations in the Twin Cities that provide education and training, healthcare and health services, homeless and housing services; and Indian child welfare, arts and school enrichment programs and services.

They were seeking $83.3 million in state bonding investments for 12 buildings that would serve their various programs. Most had gained approval by committees in the two houses of the Legislature, but didn’t make it to final votes in the two chambers.

State Senator Mary Kunesh, a DFL assistant minority leader whose district is in the north metropolitan area suburbs, told The Circle she is hopeful bipartisan agreements can still be reached and that the Legislature can be called back for a special session.
“I’m hopeful, but not optimistic,” she said. “I wouldn’t be surprised if nothing happens until next session.”

As May gave way to June, observers at the state Capitol agreed with Kunesh. That’s because the Minnesota Legislature is uniquely divided. Minnesota Democrats control the House of Representatives. Republicans control the Senate. While some leaders in both houses of the Legislature did work toward achieving bipartisan agreements on major bills late in the session, there were plenty of members who resisted in fear of who might take credit for accomplishments.

Adding to partisan tension is that this is an election year for state offices, with Gov. Tim Walz and Lt. Gov. Peggy Flanagan, DFLers, up for reelection.

Former President Harry Truman once jokingly looked back at his service in the U.S. Senate, saying, “It’s amazing what you can accomplish if you don’t care who gets the credit.” So far, there are Minnesota legislators who care greatly about who, or which party, might take credit for accomplishments and bipartisan compromises.

Kunesh said she was especially sad that the political logjam hadn’t been broken. She was a school teacher for 25 years, she said, and she knows how important “community investments” are for children and neighborhoods. She could see that during the past two years of COVID-19 pandemic cautions, she said. It hurt people when schools were closed, parks were closed, and services were interrupted for neighborhoods and communities.

There were people in the Senate who didn’t like seeing public funds going to nonprofit organizations, Kunesh said. While that might be a problem for some legislators, there is also the problem that any and all projects by the UILI organizations will be more costly down the road. Inaction now only makes everything more costly, she added. “Costs are going up, up, up.”

A case in point is the $5 million that was sought in the bonding bill for the Minneapolis American Indian Center as a continuation of its $30 million restoration and expansion project. That project seeks to restore, preserve and expand 43,486 square feet of the current facility and add 21,576 square feet of new space.

“This is the anchor, the hub, of the (Indian) community,” said Kunesh, a descendant of the Standing Rock Sioux Tribe. “It offers so many services … provides so many things.”

Education groups such as American Indian OIC and MIGIZI were among Native nonprofit organizations seeking funding in the bonding bill. The latter is developing new facilities after its building was destroyed during civil unrest after the George Floyd murder two years.

The Legislature’s inaction was especially frustrating for Native leaders given that Minnesota started this year’s session with unparalleled surplus funds in the state coffers. Both parties in the Legislature were looking at providing tax breaks.

“With the unprecedented and historic amount of resources now available to the state, it would be shameful to once again deprive the Native American community-based organizations of these resources so desperately needed to upgrade the facilities that allow for us to provide critical services for our people,” Hobot said. By acting on the UILI requests in the bonding bill, Hobot added, the elected state leaders would help roll back disparities “that our people have been heroically enduring since the very inception of this state.

“It is not too late,” said Hobot, who is also a Standing Rock descendant.

Showing the frustration level felt by Native leaders, Hobot reminded legislators and Minnesotans about a painful lesson from Minnesota history. It has 160 years ago this coming Aug. 18 when Minnesota’s first citizens were suffering from hunger and lack of government services. When they sought relief and assistance, a trader at the Lower Sioux Agency (Andrew Myrick) allegedly told government Sioux agent Thomas Galbraith, “Let them eat grass.” Myrick’s body was found at the start of the U.S.-Dakota War of 1862, his mouth stuffed with grass.

Recalling what he called “shameful moments in our shared history,” Hobot said “our people had no choice but to fight for their right to exist.

“We ask our elected state officials to not repeat the mistakes of the past. We call on them now to show Minnesota, the Tribal nations that share a border with the state and the urban Indigenous population that we here in Minnesota actually believe in authentic equity for all people – including the first Minnesotans.”