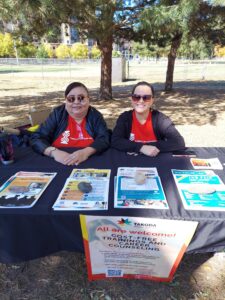 Phillips Community Clean Sweep held another successful event this year on Saturday, October 8th. The annual Clean Sweep is planned and organized by the four Phillips neighborhoods together with the City of Minneapolis Solid Waste & Recycling Department.

Thanks to Welna Hardware for hosting the breakfast donated by Allina Health, and supply pick up. Thanks to Involve MN and CityJoy for donating lunch, and to Sarah, our new Stewart Park Director, for hosting the lunch and Resource Fair.

Thanks to all the Phillips neighborhoods and Wellington, Allina Health, Open Arms of Minnesota, CityJoy, Involve MN, Thrivent, and LHB Architects for the support to make this event possible. And thanks to Michelle Howard, Minneapolis Clean City Coordinator. Thanks to all the volunteers (Catherine, Joanne, Susan, Banyan youth) who helped during the event, and to Somali TV for the coverage!

Mark your calendar for the 20th Anniversary of Phillips Clean Sweep on the 2nd Saturday in October, 2023!!