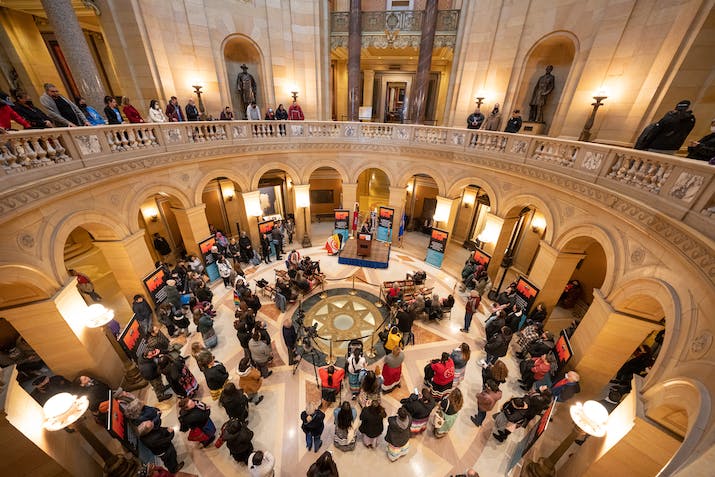 American Indian organizations rallied at the State Capitol on Friday, in support of legislation to spend nearly $84 million toward the cost of new buildings for nonprofits that provide services the groups consider critical to the Twin Cities Native American community.

“This is the biggest ask we have ever made and it is long overdue,” State Sen. Mary Kunesh, DFL-New Brighton, a descendant of the Standing Rock Sioux Tribe, told the rally of some 200 people crowded into the Capitol rotunda. Kunesh is co-sponsor of the legislation with Rep. Hodan Hassan, DFL-Minneapolis. “Join us in demanding the state of Minnesota to do better,” said Kunesh. 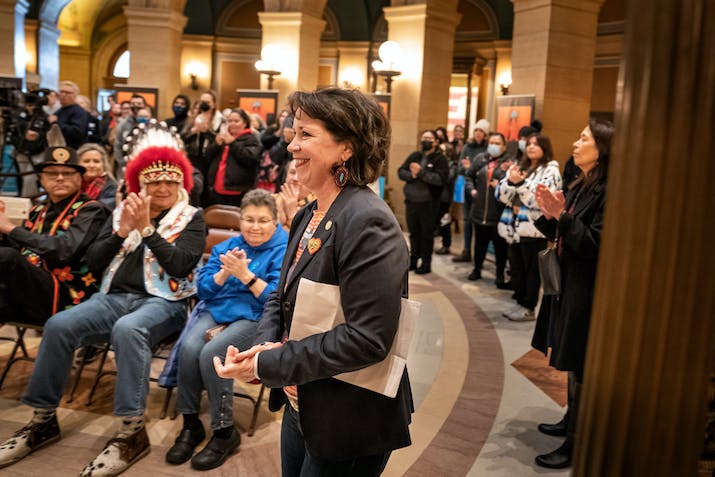 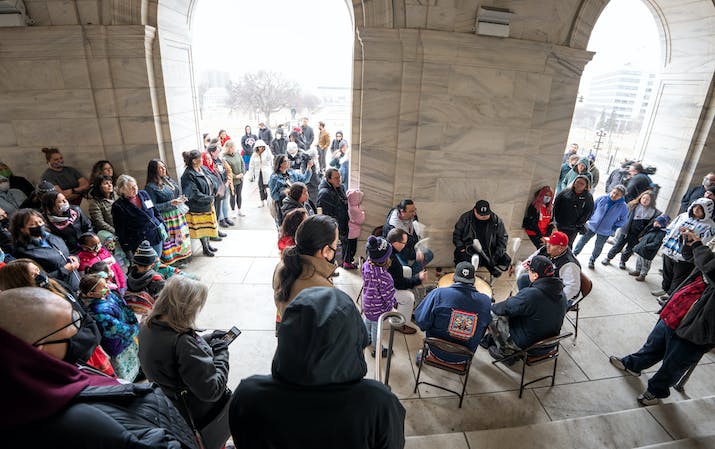 The rally began with Native Americans gathering around the Midnight Express drum group, seated on the steps outside the Capitol, singing pow wow songs. The lead drummer was Crow Bellecourt, one of Clyde’s sons.

“We are operating in buildings that are antiquated, dilapidated and deteriorating quite rapidly,” Hobot told the House Capital Investment Committee earlier this week. AIOIC operates out of a building built in the 1930s that was once a telephone book warehouse. 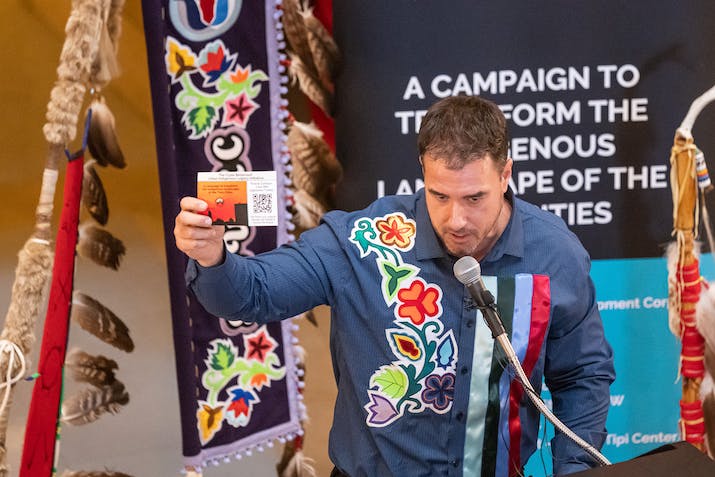 Mary LaGarde, executive director of the Minneapolis American Indian Center on Franklin Avenue that is also included in the funding request, said during a news conference before the rally that staff puts out buckets inside the building because of a leaky roof. “If you’ve ever been in our building when it’s raining, bring an umbrella,” she said.

At the American Indian Family Center in St. Paul, another facility seeking funding, the ceiling tiles are falling down and there is a hole in the floor, said Sharyl WhiteHawk, a counselor at the center’s Khunsi Onikan outpatient treatment program for Native women.

Funding for the 12 projects could be included in an infrastructure package state leaders hope to pass this session.

While the money would pay for Twin Cities projects, the funding would also help outstate tribal members, such as those who get job training through AIOIC, then return to their home areas, Hobot said.

Advocates for the projects note their push comes at a time when Native American unemployment remains high and a disproportionate number of homeless people are Native. Native Americans experienced the highest COVID-19 death rate among ethnic groups.

Rather than compete for funds, Hobot said the 16 Native organizations united around a single proposal to fund 12 projects:

During the committee hearing on Tuesday, Rep. Dean Urdahl, R-Grove City, said “there are a lot of good projects here” but that the request totaled “a good chunk of change.” He asked Hobot about the groups’ priorities if not all could be funded.

DFL Gov. Tim Walz’s proposed capital investment plan includes the bulk of the funding for these five projects as part of his “equity in bonding” initiative. The governor intends to use general fund cash, rather than borrowing, to cover the costs.

But whether Walz’s plan and advocates’ hopes bear fruit will likely remain uncertain until the final days of legislative session negotiations in May.

Many of the organizations have privately raised funds or secured federal funding to cover some of the projects’ costs — about $60 million so far, Hobart said. If the Legislature funded the five priorities, totaling about $15 million, whatever additional funds were appropriated would be pro-rated for the other projects, he said.